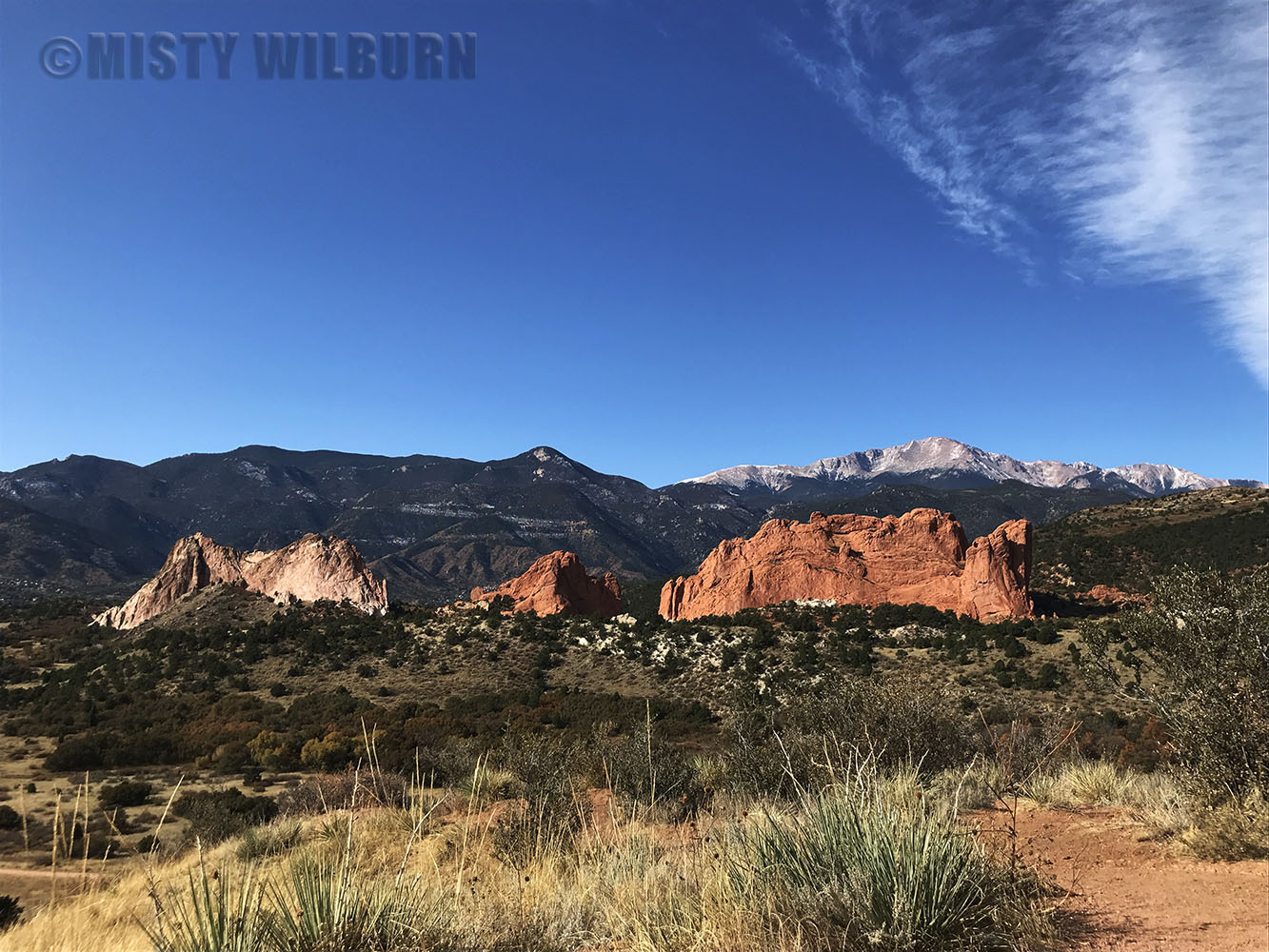 What a week this has been! It has been a while since I blogged. Honestly, my head has just not been in the right place, but this is the first fun trip I’ve been on in forever, so I just had to share!

When you travel as often as I do, it is inevitable that weird things are going to happen and they are often hilarious. I love sharing the weird, funny and stupid, so here goes ! I started off this week in L.A. on Monday for a conference focusing on Cal/OSHA — stimulating stuff. From L.A. I caught a flight over to Denver on Wednesday afternoon for meetings on Thursday and Friday with plans to stay for some sightseeing over the weekend.

When I left L.A. it was 80+ degrees in Denver. Keep in mind, this is a fairly short flight, only about 2.5 hours. When we got about 25 miles out the pilot came on and told us the weather was changing rapidly in Denver and we were going to circle for a bit because the wind was gusting at 50 mph. After circling the city for about 15 minutes, the pilot comes back on to tell us we need to buckle up. The winds have now increased to 55 mph, but we’re apparently doing this. Ok…strap in extra tight, mentally brace and I’m ready.

This dude apparently had extensive training in high winds, was used to landing on small ships or dropping Navy SEALS in dangerous territory, because our descent and landing was smoother than I’ve had in Chicago on a perfectly clear day! By the time I’ve retrieved my luggage and gotten to the car rental place it is pitch black and 40 degrees. Yep, a forty degree temp drop in 2.5 hours. And the wind in still insane. Awesome.

I get to my hotel with a bite to eat about 8 p.m. and settle in for the night. Now OhOh (aka, Mama) has been telling me for days before my trip that it is going to snow in Denver while I’m there. I HEARD her tell me this multiple times, but clearly I didn’t register what she was saying or didn’t believe her or something. All I really saw was that it was supposed to be in the 70s this weekend. So when I packed shoes, I packed my tennis shoes for the gym and weekend and a pair of open toe wedges for meetings. Yep, you read that right, open toe wedges. You see where this is going???

I woke up to this on Thursday morning:

Yep, that is three – THREE – inches of fresh snow. It is 13 degrees outside. Apparently Denver set a record for dropping a whopping 70 degrees in 34 hours. I REALLY could have done without being a part of this particular record. My meeting is at a building less than four miles away at noon. I got this. Seriously, I got this…maybe…

I get dressed – tennis shoes, because you know the open toe wedges and all -and keep telling myself that I’ve got this, because mind over matter and all that. Then I walk out to my car:

Oh, what fresh hell is this?!?! The silver one covered in what is actually about 6-8 inches of fresh snow is mine. What do I do now? I open the door because that is the next step, right? WRONG! All the accumulated snow promptly covered the driver’s seat, the dash and floor board. DANG IT!

For the record, I don’t know how these people open their doors and snow not get in everywhere. I watched several times and it is magic or something. There is something I don’t know or understand about door opening in the snow. Maybe you have to live here for them to share — like it is a rite of passage or something.

I go ahead and load my stuff up and find this little brush thingy the rental company thoughtfully left in the car! I use the brush to get as much of the snow OUT of the car as possible and proceed to brush as much as I can off the windows and windshield. I get the car cranked and the heat going. Turn on the wipers…nothing. They are frozen solid to the windshield. Oh! So THAT is why all the other cars in the parking lot had the wipers sticking up! Lovely. I sit, shivering, while the windshield heats up enough to free the wipers and notice the other end of the brush thingy is actually a scraper! YES! So back out in the cold, to scrape the windshield. I do this until a crackhead, that is yelling random curse words, holding his head and swinging it around shows up, at which point I get in the car and lock the doors. I sit in the car for about 15 minutes before it is drivable. At this point I am going to be late to my meeting, so I text my contact to tell them I’m REALLY trying, but am currently the proud owner of the don’t-know-how-to-handle-this struggle bus.

I finally get the windows clear enough to get on the road. I have no further mishaps on my way to the meeting, where I show up late, sporting tennis shoes with my dress slacks, feet, ears and fingers numb (I didn’t bring appropriate footwear, do you think I brought a hat and gloves???) and apologizing for being late because my dumb Southern butt — which is wet, by the way, from the snow I couldn’t get out of the seat — had quite the time figuring out how to get a car ready to drive in the snow. At least the team I was meeting with thought I was hilarious and then felt bad because it didn’t dawn on them that someone should have come and gotten me because the chances of me knowing how to do this was slim to none. The snow was mostly gone by the afternoon, thank goodness. I’m pretty sure my poor guardian angel was stressed, anxious, panicked and thinking they were going to need more backup than was possible if the snow had stuck around.

I get back to the hotel after the meeting at about 5:30 and finish brushing the rest of the snow off the car (I thought it would blow off or melt? Apparently that was wrong…) and a dang coyote runs through the parking lot! WHAT IS HAPPENING!?!?!

On Friday my meeting was to start at 1 p.m., so I stopped for lunch a this Cajun cafe that everyone was just raving about. The gumbo and étouffée supposedly rivaled Commander’s Palace and the beignets put Cafe Du Monde to shame.

For those of you that have not had the luxury of visiting New Orleans, Commander’s Palace and Cafe Du Monde are the king and queen of creole cooking. Both have been in business since the late 1800s. I’m talking real deal, legit food here. So hearing these claims, I’ve got some reservations, but I’m willing to give it a try.

I ended up and ordered the crawfish étouffée because the gumbo has okra in it and in my book okra is only good fried or pickled. This gorgeous plate comes out and I’m impressed!

And after that is where it all went wrong. The roux had a strange Italian flavor and nothing about the dish was spicy at all. They might have used salt and pepper, but no Cajun seasonings went near that pot. It was served with cornbread – that was full of sugar. These people are clearly heathens. After this disaster, I just didn’t have the heart to order the beignets. They might have been lovely, but there is no way they were on the same level of CDM. I just couldn’t take the disappointment. So, if you are in Denver, skip the Cajun food. They don’t get it. They think they do, the locals think they do, but they don’t. Get yourself down to NOLA if you want Cajun, or at least somewhere close to Louisiana.

After my meeting, I was off the company clock and headed down to Colorado Springs. The drive was only a little over an hour, but going down the night before allowed me to get an early start on my sight seeing!

I get up early Saturday morning, get dressed and head to the gym to start the day right! It was packed with little old men — every single machine. Little did I know, though, God knew I didn’t need to get on the treadmill. He had other plans for me.

I go back to my room, get dressed and packed up, grab breakfast and set out for Garden of the Gods.

If you haven’t heard of this place, it is simply stunning…

I quickly realize I need to park the car and hike to see everything up close! Almost four hours later I decide it is time to head back and on to the next thing, but oh my goodness did God show out on this one! This place is AMAZING! Put it on your list, but be prepared to hike, climb, huff and puff. The altitude is only 1,950 ft, but it hits you hard if you are from a little above sea level. The morning sun was REALLY bright on Saturday, but the pictures are still stunning even with some not-so-great lighting.

I can’t tell what they all are and not everything was labeled, but you get the idea that it was beautiful.

I left Garden of the Gods and headed over to Pikes Peak. Now, I didn’t really know what to expect, but I did NOT expect to wait in line for more than 45 minutes to pay to drive on a highway. I was about ready to call it quits, but I just kept telling myself that it would be fine and I didn’t have other plans for the day. Overall, I’m glad I went to the top even though the whole thing is currently under construction and a total wreck. Once I finally got on Pikes Peak Highway, it took about an hour or so to get to the top. I pulled over at mile 16 to jump on a shuttle that took me the last two miles up. I did really well driving up until about mile 14 when the switch backs got really sharp and the incline was crazy. You literally felt like you were about to drive off the edge of the world!

Like I said, there was construction everywhere up at the summit, but the view was just stunning!

Now, I know altitude sickness is a real thing, but I had not ever experienced it until I got to the very top of Pikes Peak. Within minutes I had a splitting headache, was nauseous and dizzy, and my muscles felt like water. Needless to say, I didn’t stay over a few minutes before I jumped back on the shuttle and got back down to about 12,000 ft. Almost immediately I felt almost normal again, even though a dull headache lingered the rest of the day. I cannot imagine how bad it would have been if I had not been in Denver to acclimate for several days prior to going up. If you travel to places that are much higher in altitude than you are used to, be aware, drink lots of water and take it easy until you feel steady!

Like I said though, once I got back to mile 16 I left mostly normal again and took the opportunity to do a little hiking and climbing!

Overall, it was an amazing day! I am beyond blessed to be able to see and experience so many things in this country. I don’t wear a fitness tracker, but my phone says I walked more than five miles and climbed 30 flights of stairs today. My legs and lungs say that it was more though! More adventures to come soon!